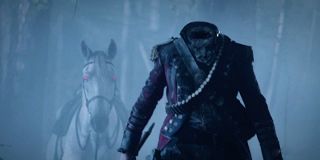 Naturally, when Burton joined the team, the film was given a whole new degree of awareness, and Johnny Depp was inevitably cast in the starring role. The pressure was on for the creative BFFs to deliver the goods on both a critical and commercial level because the film now had a $70 million price tag.

That’s exactly what they did, and Sleepy Hollow became Burton’s highest-grossing non-Batman film ever at the time of its release in November 1999. It also won an Academy Award for Best Art Direction. Sleepy Hollow received scores of 70 and 80 percent from critics and audience members on Rotten Tomatoes, showing that both parties were satisfied.

Sleepy Hollow is surprisingly gory, with buckets of blood and a variety of eye-catching kills occurring as Johnny Depp’s Ichabod Crane tries to stop Christopher Walken’s Headless Horseman from continuing his murderous rampage in the titular town. Atmospheric and offbeat are frequently words used to describe the filmmaker’s work.

Although it may not be Burton’s best work, Sleepy Hollow persists as a jarringly off-kilter supernatural fable filled with superb acting, first-rate production design, and terrifying moments. It’s also in the process of destroying Netflix’s rankings, with the over-the-top fantasy horror having landed in the Top 10 of several countries since being launched to the library in a number of international markets on October 1 just in time for Halloween, according to FlixPatrol.