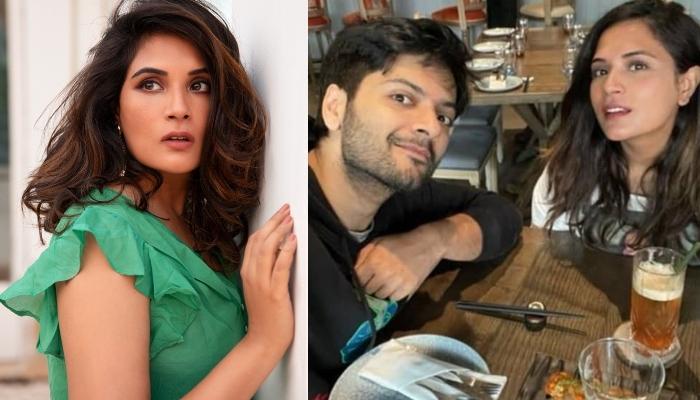 Ali Fazal and Richa Chadha take a photo together.
Ali Fazal and Richa Chadha are overjoyed to be getting married at last. Before getting married, they dated for a very long time. The pair was also seen heading for the pre-wedding celebrations in New Delhi at the Mumbai airport. The couple’s pre-wedding rituals have begun today. Richa has been giving information on the events. She also posted two images today of herself and Ali Fazal dressed to the nines and looking very gorgeous.

Rahul Mishra created a pastel-colored lehenga for Richa that has mesmerizing shimmering embroidery. She wore her hair loose, and her blouse had a feather-like pattern. A shimmery tint may also be seen in the actress’ makeup. Ali chose an Abu Jani and Sandeep Khosla chikankari kurta and churidar. A white scarf is also seen on him. When Richa shared the images, she wrote, “Mohabbat Mubarak.” She revealed a glimpse of her mehendi yesterday. It appeared to be quite lovely. Fans sent the pair heart emoticons and congratulations as soon as she published the photos.

The festivities for Richa Chadha and Ali Fazal’s wedding will come to an end on October 4 in Mumbai. The landmark The Great Eastern Home, which is a modern furniture store inside of a 176-year-old mill and is now also an event space, will host the wedding reception for the pair. According to the couple’s requests, the area will be transformed into an opulent immersive place with a design that reflects their off-screen personas. Actors Gerard Butler and Dame Judi Dench from Hollywood are also on the guest list for the wedding.