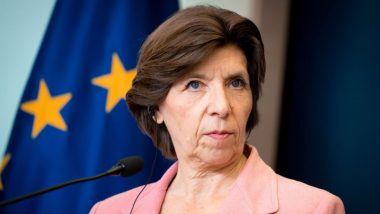 Agency, New Delhi. On September 14–15, French Foreign Minister Catherine Colonna will make her first official trip to India and her first bilateral trip to Asia. On September 14, Kolona will meet with External Affairs Minister S. Jaishankar in New Delhi to discuss matters of bilateral, regional, and global relevance. On September 15, Colona will go to Mumbai as part of the trip for engagements and site visits with influential businesspeople.

Long-standing high-level meetings and growing convergence in a number of areas have enhanced India and France’s strategic cooperation. The French foreign minister’s visit will pave the way for further developing ties in the fields of commerce, defence, climate, migration and mobility, education, and health, according to a release from the foreign ministry.

In the past, there have been cordial ties between France and India. In addition to their strong and expanding bilateral connections, the two nations’ strategic partnership, established in 1998, reflects their shared views on a number of global concerns. Economic relations between the two nations are strengthening. French companies and industry have established connections with the Indian economy and made a substantial contribution to our effort to make India self-sufficient.

Over a thousand French companies operate in India in a variety of industries, including heavy industry, ITeS, consulting, and defence. With a cumulative FDI stock of USD 9 billion from 2 April 2000 to December 2020, France ranks as the 7th largest foreign investor in India and accounts for 2% of all FDI inflows.

The two nations signed a bilateral “Fast Track Mechanism” for investors at the 18th Joint Economic Committee meeting, which was held virtually between the two nations on November 27, 2020. The initial meetings took place between Paris and the French Treasury on February 16, 2022, and between the Secretary, DPIIT, and the French Ambassador on February 25, 2022, in Paris and Delhi, respectively.

In February 2021, Piyush Goyal, the minister of commerce and industry, also arranged a conference for French companies, as part of which Invest India set up a special desk for investor questions. India has been pursuing an early agriculture trade deal while pursuing a broader FTA in recent negotiations at the EU level.