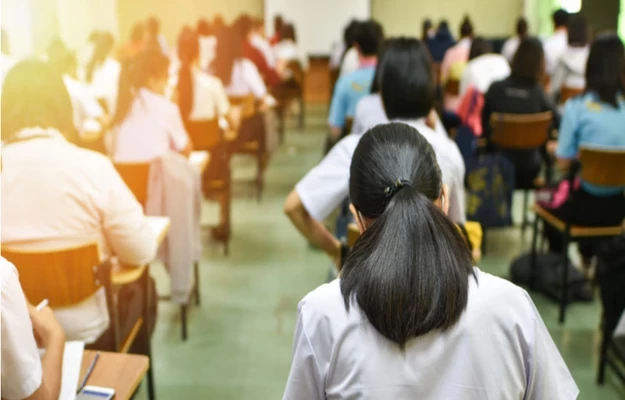 The priests at the Talwandi area Radha Krishna temple claim that students’ devotion has grown so strong over the years that the temple needs to be painted every two months.

“Please let me get picked in NEET 2023,” “Dear God, please give my concentration back,” “AIIMS Delhi please,” “IIT Delhi for me and Google for my brother” are just a few of the requests that numerous coaching centre students have written on the “wall of beliefs” at a local temple. Every year, thousands of students travel to Rajasthan’s coaching hub of Kota in the hopes of being accepted into some of the most prestigious engineering and medical schools in the nation. However, many of them quickly become bogged down by busy schedules, peer pressure, and the weight of expectations.

The priests at the Talwandi area Radha Krishna temple claim that students’ devotion has grown so strong over the years that the temple needs to be painted every two months. They said that every day, more than 300 pupils attend the temple.

This year, a record two lakh pupils have enrolled in local coaching facilities. The “wall of beliefs” got its moniker when the temple gained notoriety in the early 2000s when a few students who had scrawled their prayers on the wall passed the engineering entrance exam IIT JEE and the medical entrance exam, which the temple authorities had at first perceived as defacing.

“Many years ago, when a few students came to pray here, they wrote their desires on pieces of paper and asked for their selection in the IIT JEE or medical entrance exams. A few months later, parents of two pupils went to the temple and offered to donate money, saying the wishes their kids had written on the wall had come true. From that point on, it started to become popular.

“At first, people used to write their wishes on the temple walls wherever they pleased, and we tried to discourage them by citing vandalism and even by threatening action. However, when the residents’ and students’ faith grew, we decided to create certain locations in the temple, which we termed the “wall of beliefs,” according to Kishan Bihari, one of the temple priests, who spoke to PTI.

Trilok Sharma, a different priest, claimed that the temple undergoes painting every two months since the walls are frequently covered in people’s desires, leaving no room for others to write. Every time students visit, we also give them blessings and prashad and remind them to try their best since that is when God will aid. The secret is hard effort, “We continue to speak with students and parents. Sometimes, students even write down their college preferences or rankings. We teach that while manifestation is good, it also needs to be backed up with work, he said.

The temple offers a place for students to meditate and unwind while dealing with stress from the intense competition. “I have not yet inscribed my wish on the wall; when I am confident in my preparation and closer to the big test, I will. However, throughout my studies, if I feel down or overwhelmed, I come here and pray or meditate to feel better “said Madhya Pradesh native Pragati Sahu, a candidate for the National Eligibility Cumulation Entrance Test (NEET).

Another student, Kashish Gupta, a Maharashtrian JEE aspirant, said: “The prevalent belief is that give your hundred percent and express your request accordingly. It’s not like someone will write that I want No. 1 rank and he or she will receive it.

In addition to making family back home pleased, many of the wishes written on the walls also concern improving concentration and focus and getting rid of unfavourable ideas. The temple is well-liked not only by students but also by their parents, who make a point of going there whenever they pick up or drop off their wards.

“We learned about the temple when we travelled to Kota to enrol my son. However, we were unable to attend at the time, and I also reasoned that it is hard labour rather than writing on a wall that grants these wishes. However, many of my son’s seniors who submitted wishes were chosen, so I made the decision to go this time, and he has also inscribed his desire on the wall “said Priyanka Mittal, a JEE aspirant’s mother.

The typical day of a student attending a Kota coaching centre includes back-to-back lectures, test series, a constant competition with peers, and striving to stay up with the curriculum.